Whether it’s American, French, Russian or Buffet will determine the better to serve you, my dear! 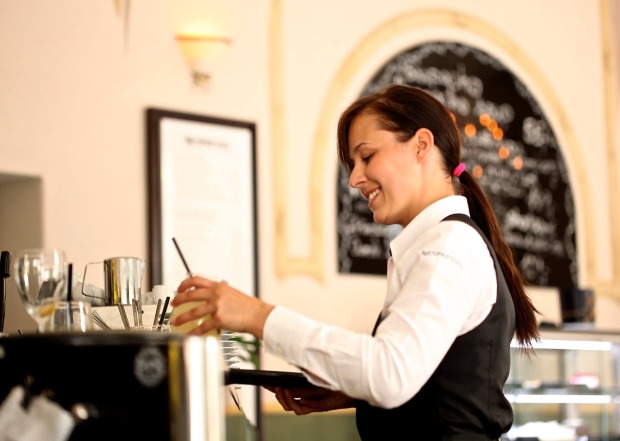 As I wrote about last time, the wait staff can be a great partnership whether you are the host or the guest at a dining event and whether the event if formal, informal or casual.  On the more formal scale, there are a few different types of waiter service of which you should be aware, and of which a professional wait staff is thoroughly versed.

Food is arranged on plates in the kitchen and brought to the table in this fashion, which is the reason that this service is also called Plated Service.

This service is also known as English Service, and is the type that you will see on Downton Abbey. Food is brought to the table on platters with serving utensils that the diners use to help themselves to a portion. In another version of English Service, the host will carve the meat and place portions on plates that the waiter, or butler, has brought to the table and placed near the host. The host might also place a portion of vegetables on the plates, as well. As the host or hostess completes each plate, the waiter(s) will place the plates in front of the diners, serving the guest(s) of honor first and the host(s) last.

Food is brought to the table on platters and served by two waiters, one who holds the platter and the other who places the food onto the guests’ plates. This is called French Banquet Service. The other type of French service is called French Cart Service, in which food is served from carts that are wheeled to the table. Dishes are often prepared in front of the guests and then served onto their plates. This latter style is often used in very upscale restaurants, often involving the preparation of elaborate dishes in front of guests such as salads and flaming desserts, and is quite elegant and entertaining.

This service is similar to Butler Service in that the waiters bring the platters of food to the table and hold them while the guests serve themselves by removing portions of a course from the trays that the waiters are holding onto their plates.

This is a very formal service, rare nowadays, in which waiters serve food on silver platters and in silver bowls and serve the guests by dishing out the food onto their plates for them.

This type of service involves a number of tables and carts that are set up with a variety of dishes and courses. Each station is staffed by a server who will serve the selections or chefs who will actually prepare dishes; the latter might include items that must be served immediately upon preparation such as omelets, crepes, salads, parfaits, flaming desserts, etc. Stations are popular for weddings, bar and bat mitzvahs, anniversary parties and other upscale occasions.

This style is used at cocktail and networking receptions where servers carry trays of hors d’oeuvres among guests who are standing or sitting at small tables while chatting and enjoying drinks.

Other styles of waiter service include the following:

In this service, the waiters stand behind a long buffet table that holds a variety of foods. The kinds of dishes offered depend on whether the buffet is a breakfast, lunch, dinner or reception buffet. The waiters will carve meats and serve other dishes to guests who wish them, placing the items that the diners indicate on their plates as they pass through the buffet line.

This kind of service can be very casual, with the diners picking up their plates, napkins and utensils at the beginning of the buffet line, or it can be more formal with tables that are already set with covers and the diners merely bring their filled plates to the tables.

This is an informal or casual style of service where the waiters bring platters and bowls of food to the table and set them down for the guests to pass and serve themselves.

There are two basic types of bar service. The first is an Open Bar, which you will usually find at weddings or other private parties or events where the guests do not pay for their drinks and are not expected to tip the bartenders. The second is a Cash Bar, which you often will find at college, business, community or political networking events and the like, where guests are expected to purchase their drinks and tip the bartenders.

Serve From the Left, Clear from the Right (or is it the other way around?)

The traditional and proper way to serve is for the waiter to serve food from the left and clear away used dishes from the right. The deviation from this rule might occur when using American, or Plated, Service. In that case, the trend has been both to serve the prepared plates and clear them away from the right; and only bread, rolls and side dishes are served, as well as removed, from the left, as the left side is where those dishes are placed.

Another exception to the rule is French Cart Service, in which the cart is brought to the right side of the diner and all service occurs on that side.

However, drinks are served and removed from the right side only, because that is the location of the glassware and it would not be practical to serve from the left and have to reach across the diner.

During the time that waiters are serving and clearing, you as the diner should sit up straight and avoid leaning one way or another thinking that you are getting out of the waiter’s way. Instead, by leaning one way or the other you could collide with a waiter coming from the other side, either serving the person to your right or filling your water glass on one side while the waiter is removing your side dish from the other.

And don’t forget to acknowledge your server at intervals and say “thank you.”