"In the first 100 days of the war, President George W. Bush increased homeland security and built a worldwide coalition that...began to destroy al-Qaeda's grip on Afghanistan by driving the Taliban from power...helped the innocent people of Afghanistan recover from the Taliban's reign of terror...helped Afghans put aside long-standing differences to form a new interim … END_OF_DOCUMENT_TOKEN_TO_BE_REPLACED 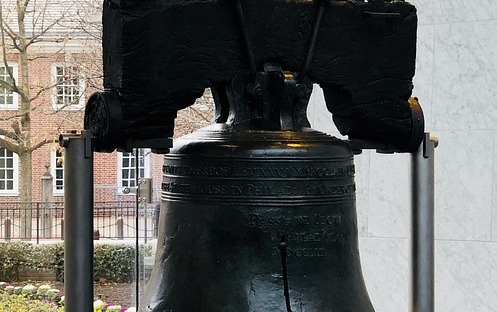 "Its most famous tolling, however, was on July 8, 1776, when it summoned Philadelphia citizens for the first reading of the Declaration of Independence." ~ Liberty Bell tolls to announce Declaration of Independence, history.com The Liberty Bell cracked beyond repair on February 23, 1846.~ National Park Service “A lady asked Dr. Franklin Well Doctor what … END_OF_DOCUMENT_TOKEN_TO_BE_REPLACED

Jeanne's "I Got The Shot" Collection “It may be socially inappropriate [to ask someone if they've been vaccinated against COVID-19], but there is more of a compelling need if it’s a potential health threat like an infectious disease. You may fear that if an unvaccinated person accompanies you into a restaurant, then they can be … END_OF_DOCUMENT_TOKEN_TO_BE_REPLACED

. "We do not have government by the majority. We have government by the majority who participate.” ~ Thomas Jefferson "We have a saying around here, use it or lose it." ~ Former U.S. Secretary of State George P. Shultz. Dear Readers, Please forgive my delay in posting. Like many others, I've been shell shocked … END_OF_DOCUMENT_TOKEN_TO_BE_REPLACED

"This bill responds to the COVID-19 (i.e., coronavirus disease 2019) outbreak and its impact on the economy, public health, state and local governments, individuals, and businesses." ~ Heroes' Act - H.R. 6800 Note: The U.S. House of Representatives passed the Heroes' Act in May and an updated version in October, but it has yet to … END_OF_DOCUMENT_TOKEN_TO_BE_REPLACED

"This week marks the 100th anniversary of the passage of the 19th Amendment. And we celebrate the women who fought for that right. Yet so many of the black women who helped secure that victory were still prohibited from voting, long after its ratification...We're not often taught their stories. But as Americans, we all stand … END_OF_DOCUMENT_TOKEN_TO_BE_REPLACED

Workplace confidentiality is not just refraining from spreading the latest gossip, keeping a secret a coworker has asked you to keep or protecting the confidences of your boss. Those are certainly important, but I'd like to focus on those confidences that are required by law -- the ones that protect the privacy of students, patients, consumers, clients and customers. These regulations are meant to strengthen the protections of Americans' right to privacy that is implied in the U.S. Constitution. It is crucial that these privacy laws that protect all of us be enforced in every workplace that is affected. And because these laws are complex employees should check with their respective company's legal and compliance sources for answers to specific questions and solutions to complicated issues.

"My candle was nearly burnt out,
when, by the glimmer of the half-extinguished light,
I saw the dull yellow eye of the creature open."
~ Frankenstein, Chapter 5, by Mary Shelley

This year as Halloween approaches we find ourselves facing a terror that surpasses the usual seasonal frights of Michael Myers, werewolves, ghosts, poltergeist and vampires: the Presidential election season.

For many of us, the shocks we have received are akin to the horror that Dr. Frankenstein felt about the creature he had created. We've watched with revulsion as our modern-day monster of incivility, bullying, intimidation and hatred has opened its eye and been unleashed upon our nation.

“Every election is determined by the people who show up.”
~ Larry J. Sabato, Political Scientist

While making calls recently for my Presidential candidate, after the third voter hung up on me I laughed, joked and commiserated with my fellow phone bank volunteers, some of whom had been experiencing the same responses. We had been making Get Out The Vote (GOTV) calls in advance of the Iowa caucus. Most of the voters we were calling were already on board with our candidate, but even among those loyal supporters there were some who were outraged at the number of calls they had been receiving. I was used to this type of response from my first political campaign back in 1968.

There never will be complete equality until women themselves
help to make laws and elect lawmakers. ~ Susan B. Anthony (1820-1906)

Although it took nearly three-quarters of a century, American women made good on Abigail Adams's threat in 1776 to her husband, John Adams, as he participated in the creation of the United States Constitution: "...we are determined to foment a rebellion, and will not hold ourselves bound by any laws in which we have no voice or representation.” Once underway, that rebellion -- begun at the Seneca Falls Convention in 1848 -- lasted another nearly three-quarters of a century, but it resulted in the Nineteenth Amendment, ratified in 1920, which guaranteed all women nationwide the right to vote. Prior to that, each state decided whether to grant women the right to vote, and, shockingly, some states actually revoked their right. But many states did grant women the right to vote, and it was in 1917 that a leader in the suffrage movement of one of those states, Jeannette Rankin of Montana, became the first woman elected to Congress.