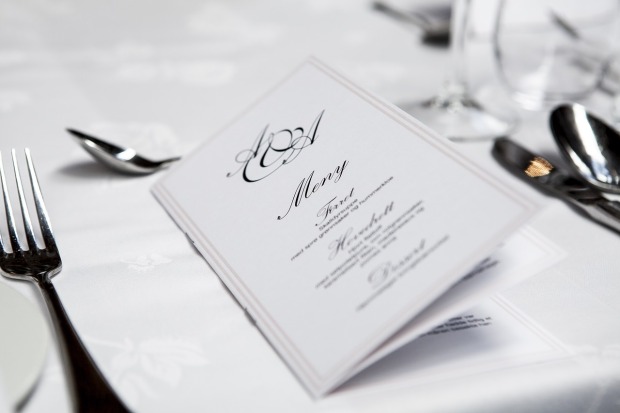 There was no food as yet on the glittering golden plates, but small menus were lying in front of each of them. Harry picked his up uncertainly and looked around—there were no waiters. Dumbledore, however, looked carefully down at his own menu, then said very clearly to his plate, “Pork chops!” And pork chops appeared.” ~ Harry Potter And The Goblet Of Fire

We might not be able to summon our courses directly from the menu card the way the Harry Potter crowd did, but all the same there is a magical atmosphere that surrounds a formal dinner party.

Whether they are purely social affairs that are held in someone’s home or black-tie charity events that take place in an upscale catering hall or in a ballroom, guests will usually find elegantly designed and beautifully printed menu cards at their place settings. Menu cards are laid across the chargers or directly on the table between place settings. Alternatively, they can be placed upright in small holders and located above the chargers.

The cocktail hour might include drinks only. For example, when preceding a dinner consisting of five or more courses, hors d’oeuvres are not necessary. But, before a dinner of three or four courses it is customary to accompany cocktails with light nibbles.

During the Middle Ages (C.1066-1485) and Renaissance (C. 1485 -1527) periods, the nobility hosted lavish banquets that consisted of many courses, perhaps 20 or more, and lasted for hours. Typical dishes included grains, vegetables, game animals and sweets in the form of stews, soups, sauces, roasts, pies and breads. Later on, the multiple-course meal continued in upper class manors, although in its more refined state the multi-course dinner consists of relatively small portions.

The best-planned menus include dishes that are balanced among protein, vegetables and starches and contain a variety of flavors and textures that contrast but complement each other, such as sweet and savory, strong and mild, smooth and crunchy and so on.

In her book, The Art of the Table, Suzanne von Drachenfels says, “Moreover, a well-balanced menu does not duplicate taste. When cheese is served as an hors d’oeuvre, it is not incorporated in a dish served at the table. Because sweet foods dull the appetite, fruit is not served as an appetizer. The exception is grapefruit, which has a sharp taste that stimulates the palate. When a first course is served in a pastry shell, dessert with a crust is not appropriate. If creamed soup is served as a first course, creamed vegetables are not included in the main course. When sauce is served, it is presented only once.”

In formal dining the dishes are served in courses, as opposed to family dining when all the dishes are presented at once, and diners help themselves by passing platters of food around the table. Most typical are either three or four course dinners – salad or appetizer, soup or salad (optional), main course and dessert. If more than four courses are served, the individual courses tend to be much smaller and there is more time between courses to savor the tastes and rest. In a very formal setting, a wine that complements it will be served with each course.

During the intervals between courses, diners converse with each other. If you must leave the table to visit the restroom you should do so during such an interval; however, you should never be away from the table for long, as it is considered very poor manners. If you find that you must be away for awhile, make no excuses but merely murmur a quiet apology upon your return, smile at your dining companions and rejoin the conversation by first listening and only commenting when there is a lull.

Under no circumstances should you produce your cell phone; if you must take or make an urgent call, wait until an interval occurs and then quietly excuse yourself, find an appropriate place far away from the dinner table and then take out your device. While you are at the table, your device should be turned off, and not even placed on vibrate if in doing so it will still make a sound.  It is the responsibility of all the diners to make an effort to keep the continuity of the dinner intact and flowing pleasantly with as few interruptions or disturbances as possible.

This is a very formal meal that typically consists of the following courses, the order of which can be changed depending on the preferences of the host or chef. For example, some hosts prefer to start with soup, others an appetizer with soup as the second course; some would like to serve the salad before the main course and others wish to serve it afterward. Following is an example of a seven course dinner:

First Course
Light Appetizer, such as a crabmeat cocktail

*Interim Course*
Sorbet, to cleanse the palate after the heaviest course

Sixth Course
Dessert, which is a small taste of something beautifully and dramatically prepared, and which is rich and sweet, again to complement the other courses in taste, texture and ingredients, such as Baked Alaska, Chocolate Ganache Tart or Crème Brûlée

A Word About Bread and Coffee

In a very formal seven-course meal, bread might not be served because of the amount of starch throughout the meal in the form of crackers and toast (served with the soup and cheese courses) and dishes that might be served in or with crusts, etc. However, if bread is served, it will be brought out by the waiters when appropriate, either serving each guest individually or placing baskets of rolls and/or breads on the table.

As discussed in a previous post, coffee may be served after the dinner has concluded at the table or in a separate room. Or it might be served with dessert. The reason coffee and tea are served in a separate area is to allow guests to rise from the table and stretch their legs, as well as to provide a change of scenery after sitting so long at one table.

This is much more popular now, first, because it’s more economical and, second, because guests do not have to sit so long. Even The White House serves four-course meals at State Dinners. Here is an example from the March 12, 2012, State Dinner to honor David Cameron, the Prime Minister of the United Kingdom and his wife Samantha (the presentation below is mine, taken from information posted online):

Dessert
Lemon Sponge Pudding
In the British style, served with Newtown Pippin Apples,
a variety that was grown by some of the U.S. founding fathers,
and was sent as a gift to Queen Victoria in 1838