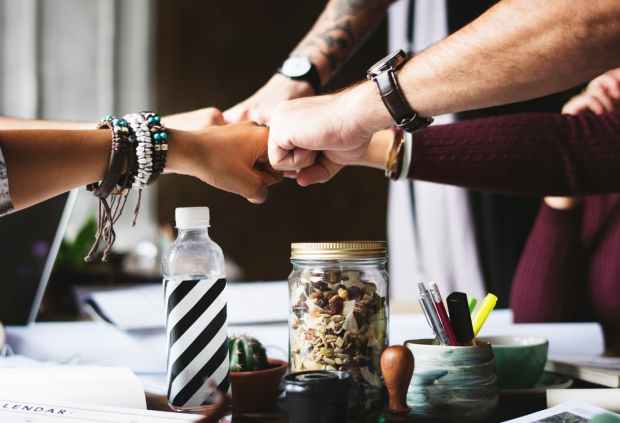 Do not greet people with hand-shaking, avoid body contact with others
until the crisis is over. ~ World Health Organization

There is irony in the cultural lore of handshaking having originated in Europe during the Middle Ages as a lifesaving measure to demonstrate that neither person was carrying a weapon in his hand or up his sleeve, and today’s declarations from medical experts that handshaking could possibly be a life-threatening gesture because it can transmit deadly viruses and bacteria.

With the current threat of Ebola spreading, the handshake seems to be fast becoming a health liability rather than a social asset. But this isn’t the first time that handshaking has been targeted as a conveyor of dangerous viruses and bacterial infections; remember H1N1 and MRSA? And those who are considerate of others regularly decline to shake hands to avoid spreading the common cold and seasonal flu viruses.

But, it won’t be easy to make the shift away from routine handshaking, which in the Western part of the world has evolved into an essential form of greeting and communication in social situations and has been de rigueur in the practice of business etiquette. Handshaking is also a demonstration of one’s character, savvy and strength. A person is often judged by his or her handshake because it’s so intimate a gesture. You’re actually touching someone in an acceptable manner; in doing so you obtain the measure of a person through the firmness of the grasp, dryness and warmth of the skin, proper engagement of palm and thumb, amount of pressure applied, angle of the hand, etc.

The power of a handshake is such that we will often remember it even if we forget the possessor’s name and when and where we met him or her! Whether a job candidate is hired or a business deal is closed is frequently influenced by the impression made by the handshake.

And, in the past century or so, through intercontinental trade and global travel for business and pleasure, the tradition of the handshake has reached around the world to other cultures.

Take away the handshake and we lose a critical component of obtaining an impression of someone.

That is precisely, however, what is occurring in our society in the wake of the H1N1 pandemic scare of 2009 and its resurgence in 2014, the resistance of the MRSA bacteria to the usual antibiotics, and now the threat of Ebola in the U.S., Canada and Europe.

But it is the news of Ebola reaching beyond Africa that is currently commanding everyone’s attention. And because there is more to be learned about Ebola — even prominent doctors and scientists disagree with each other on all the ways that the virus can be transmitted — it’s wise that everyone keeps up with the latest news and errs on the side of caution in preventing its spread. That includes limiting or forgoing handshaking.

According to a CNN Health report, ”People in West Africa are avoiding hugs and handshakes because the virus can be spread through the sweat on someone’s hand. The uninfected person would have to have a break in the skin of their hand that would allow entry of the virus, CNN’s Dr. Sanjay Gupta says. ‘We all have minor breaks in our skin. And there is a possibility that some of the virus can be transmitted that way.’”

In addition to some medical experts fearing that the Ebola virus can be spread more easily than is being assumed, there also could be loopholes in some of the preventative procedures. For example, while we’re being assured that travelers are being checked at airports for fevers before boarding flights, an LA Times article quotes an expert as saying that “a person could pass body temperature checks performed at the airports by taking ibuprofen or any common analgesic.” Therefore, it’s essential that every person take responsibility and initiate her or his own precautions, which might include the adoption of alternative forms of greetings other than handshakes.

Aside from the current Ebola threat, here are some other reasons that people might avoid shaking hands:

Following are some popular and viable alternatives to handshaking:

Namaste is the lovely and quite formal greeting that originated in India. Nirmala Lalvani, Etiquette Trainer from India, says, “The namaste in India is a secular greeting and used by one and all, but it is also widely used in countries where Buddhism is prevalent, such as Thailand, Vietnam etc.”

This approach is a departure for many Westerners who like to demonstrate great energy and enthusiasm in their greetings, especially when they are making first impressions. However, this very respectful form of greeting could well be appropriate in certain circumstances where one wishes to make a quietly powerful presentation.

Business etiquette expert John Daly knows people who in lieu of a handshake have started using the Japanese form of greeting. Says Mr. Daly, “I think for the safety and health of all citizens that some other form of greeting might be advisable until this potential epidemic threat is conquered.”

Like the Indian greeting this lovely, deeply respectful and comparatively gentle alternative to handshaking might take some getting used to for Westerners, but with practice it could be the perfect alternative.

This is a surprising one, but it might make sense. After all, this isn’t the first time healthcare authorities have cited the elbow in preventing the spread of germs; it’s suggested that you bend your arm and use the inside of your elbow to catch your sneeze when you cannot transport a tissue or hanky to your nose and mouth in time to do so. Image expert and consultant Clare Maxfield recently referred participants on a LinkedIn forum to a radio interview on WGN (Chicago) in which infectious disease expert Dr. Aileen Marty recommended a greeting that appears to be using elbows.

Historically used by boxers, bikers and baseball players to greet each other, the fist bump is enjoying a growing popularity in many informal as well as business occasions. It’s enthusiastically advocated by the healthcare community as a gesture that spreads far fewer germs than handshaking. You might already be on board with proper fist bumping; but, if not, why not prepare yourself so you’re ready should a fist bump come your way?

Okay, you say, it’s fine that we stop shaking hands, but which of these alternatives should we adopt? With all the choices, what happens if in a group of people being introduced one person bows, another fist bumps and another makes a go for your elbow? Yes, that’s quite a visual and I can see an SNL sketch or a Tonight Show monologue forming! But, in reality, the initial awkwardness will likely be the extended hand to shake yours and you instead bow, explaining your shift in greeting etiquette. However, once the word spreads about the alternatives to the handshake, groups of people in specific situations will begin to adopt an appropriate greeting that fits the people involved as well as the occasion. We’re just starting the conversation and it is, as they say, a process.

Another issue to consider in your shift from the handshake to other greetings is to develop an awareness of what certain gestures mean in different countries and cultures so you can avoid making a faux pas. This Huffington Post Business feature contains helpful tips on that score.

As an example of art imitating life, in the movie, Contagion (with an all-star cast that includes Matt Damon, Kate Winslet, Jude Law, Laurence Fishburne, Marion Cotillard, Bryan Cranston and Gwyneth Paltrow), which was made in the wake of the 2009 H1N1 scare, a woman contracts a deadly virus and unknowingly ignites a mega and rapid-fire epidemic. At the end of the movie it’s revealed that this human disaster resulted from two people engaging in hand-to-hand contact.

I think this quote in the Psychology Today article by Dr. Alex Lickerman, Internist and former Director of Primary Care and current Assistant VP for Student Health and Counseling Services at the University of Chicago, reflects the conflicted feelings of many regarding the handshake and spread of illness: “So here I am, making a case to change one of the most cherished traditions in Western culture. I don’t have much hope that my plea to stop all this handshaking will be heeded, though. I don’t think I can stop even myself. I like shaking peoples’ hands. Touch cements trust, an important feeling the handshake has long symbolized. Yet we can’t deny that a handshake has become, in one sense, a modern-day health hazard with the capacity to spread infectious diseases at an alarming rate.”

5 thoughts on “Greeting Etiquette in the Age of Ebola”