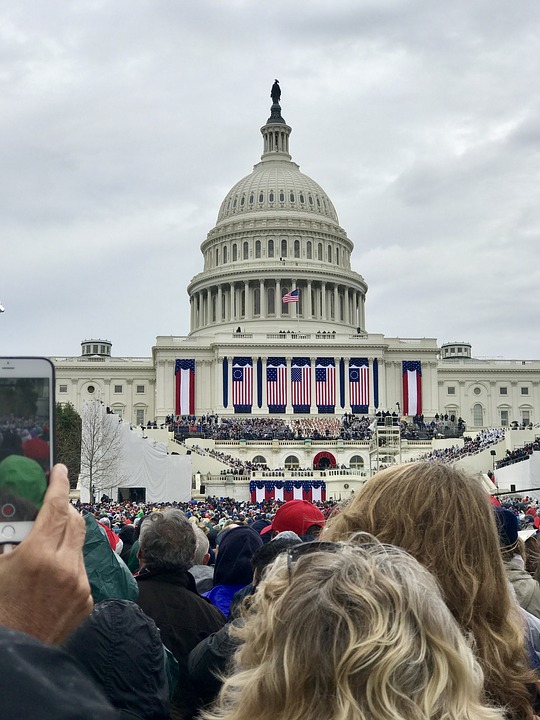 “We have a saying around here, use it or lose it.” ~ Former U.S. Secretary of State George P. Shultz.

Dear Readers, Please forgive my delay in posting. Like many others, I’ve been shell shocked and absorbed with the events of January 2021, which was a month for the history books! It has taken me awhile to recover from the political PTS! Ditto for February! But my fingers are once again flying over the keyboard! And for those who wonder why an etiquette consultant occasionally writes about politics, it’s because recently the political climate — even more than usual — has overwhelmed and undermined etiquette, which encompasses respectful and appropriate behavior toward everyone in every walk of life. I cannot let such impediments to decent and considerate behavior pass without comment.

In just a few months, we Americans went from an election to an insurrection to an inauguration. Despite that second event, it appears that our republic and our democracy are still standing. But in the wake of the insurrection against the U.S. Capitol and our elected representatives, we need to remind ourselves that our republic is one in which We the People are in charge of governing. As such, we urgently need to take stock of the job we are doing.

In my corporate life, I often heard the warning, “use it or lose it” in reference to budgets and FSA accounts. Healthcare professionals have used the term to refer to physical or mental well-being. And now more than ever, that phrase also applies to our democratic model of self-government.

So, at the risk of repeating myself so soon after my post, Responsibilities Of American Citizenship (Oct 29, 2020), I feel this subject must be revisited. The right to self-govern is the bedrock of our Constitution. Indeed, the first three words of the Constitution are, “We the People”! The process our founders set up allows us to determine our destiny through elected representatives. But to accomplish this properly, we need to make wise decisions and good choices as to who should represent us! We need to embrace our Constitutional responsibility by using the tools provided to us to exercise the right to self-govern. If we fail to use this right, we stand to lose it.

We often forget that the United States, although a powerful country and strong democracy, is still comparatively young and, as such, fragile. After nearly two-and-a-half centuries we are still struggling to “form a more perfect Union…insure domestic Tranquility…promote the general Welfare…” We need to be reminded often of the response of Benjamin Franklin upon being asked what kind of government the delegates to the Constitutional Convention of 1787 had formed: “A republic, if you can keep it.”

How do we keep our republic? As citizens and stakeholders in the United States of America, we hold enormous power over that which affects our lives by casting our votes to elect officials that we want to represent us in Washington, D.C., as well as in our respective states, counties, cities, towns, villages and hamlets. We notice the differences among the various officials that we elect by what they say, and more importantly, what they do. We are affected by their policies, laws and decisions. Consequently, every voting citizen should evaluate and decide which officials should stay and which should go. Those citizens who can vote but choose not to are — plain and simple — giving away their Constitutional power of decision-making.

The Brookings Institute weighed in on how much the concept of self-government has mattered, by tracking voting over the past 20 years. In 2000, only 50% of voters thought it mattered who won the Presidential election, and 44% felt that it didn’t matter. But in 2020, a whopping 83% thought it mattered, and only 16% felt it did not matter. What happened to change the demographics?

There are a number of factors that determine voter turnout: Voter suppression and intimidation, campaigns to get out the vote (GOTV) efforts, gerrymandering, the Electoral College, voter apathy and distrust, ignorance, disability, illiteracy, the attractiveness of the candidate, and a crisis (economic crash, war, pandemic, etc.). Minorities, those below the poverty level, and young people are among those Americans whose voting records and involvement with their government remain low.

Americans have struggled to ensure that everyone has the right to vote, and millions have fought and died in wars to defend that right. Why, then, would we not exercise that right every chance we get? And why would we not stand up for the right of every citizen to vote?

What Happens When We Vote — And When We Don’t Vote?

A number of crushing issues converged in 2020: the COVID-19 pandemic, with its negative impact on health and the economy; racial and ethnic inequality; criminal justice reform; healthcare coverage; brutal immigration policies and actions; and the lingering outrage over the hypocritical Senate approach to Supreme Court nominations. All of these created a perfect storm that according to various reports drove the historic 2020 vote of nearly 160,000,000 Americans — roughly two-thirds of U.S. eligible voters.

Added to that was the growing disapproval over inaction on a number of ongoing issues — including the escalating climate crisis, the much-needed national infrastructure project, the disturbing foreign policy trajectory, racial injustice, women’s reproductive freedom, LGBTQ rights, gun safety legislation and the aforementioned voter suppression. Voters were motivated like never before to flock to the polls, or to their mailboxes. The impatience of the majority of Americans had reached critical mass.

The result, as we have seen, was that citizens exercised their responsibility to self-govern and changed their government leadership by electing different representatives from the top down. But for the first time in U.S. history, there was not a peaceful transfer of power. For months, the sitting president refused to accept the election results and appeared to incite the physical attack on the Capitol, elected officials, staff and law enforcement in an attempt to stop or delay the counting of the results of the Electoral College vote and certification of the winner of the presidential election. That, in turn, prompted a second impeachment trial of that president.

To preserve America’s self-governing legacy, we must ensure that we elect reasonable, rational and intelligent representatives that are ready and willing to shoulder the responsibilities of their respective offices and that we can trust to be true to their oaths of office.

We can do that by:

Some Thoughts On Unity

Last month, millions of people in the U.S. and around the world watched as NASA successfully guided Mars Rover Perseverance, nicknamed “Percy,” to a successful landing on the Red Planet. This amazing feat would not have happened but for the thousands of individuals working in unity toward a common goal. It did not happen overnight, but patience, determination, perseverance and working together resulted in success.

If only we Americans — and our Congress! — could be so unified in achieving critical goals! But Americans are sometimes hard to convince that when we are all in the same boat, rowing in the same direction, we could actually propel ourselves to a safe harbor and other beautiful destinations.

Lack of unity is certainly evident in the current division over wearing masks to combat the COVID-19 pandemic. But this is not the first time that many Americans have resisted working for the common good in the name of personal freedom. Remember seat belts? It took decades for many Americans to accept seat belt laws that saved lives because they claimed that their freedoms were being violated!

But while Americans will quibble over discrete common-sense proposals to protect themselves and others, when a crisis strikes Americans have been known to unite. We learned from history, and perhaps from our parents and grandparents, about how the attacks on Pearl Harbor on December 7, 1941, unified Americans and kept them unified throughout WWII. While 16 million Americans, including some 350 thousand women, enlisted or were drafted to fight alongside our Allies in Europe and the Pacific, many more Americans stayed behind and sacrificed by rationing food, equipment and materials; purchasing war bonds; and, again, notably women, flocking to factories and plants to take over the jobs that men had to leave in order to join the military. It was an era in which Americans were firmly united against common foreign enemies and a patriotic cause.

More recently, the September 11 attacks strongly unified Americans. Patriotism and protection of our country against our enemies were intense in their wake. Our allies were firmly behind us. We adhered to “if you see something, say something,” watched the daily color-coded terror warning system and, despite some grumbling, endured often lengthy and tedious security checks everywhere.

Now that we find ourselves battling a new kind of enemy attack, it is perplexing and sad to see so much division over mask wearing and other safe practices that have for many months been advanced by medical experts. This is especially true as we are seeing some light at the end of the pandemic tunnel and need to remain vigilant. Yet, to many Americans this viral enemy does not seem to concern them, even though it has killed more than a half million Americans and the toll continues to grow.

To combat this crisis, for months the world and our nation have had to shelter at home; attend to work and school online; and see family, friends, coworkers and neighbors only on a screen. Jobs and income have been lost, and threats of foreclosure or eviction continue to haunt us. Costs of shopping exclusively online have contributed to shrinking bankrolls. And, tragically, too many of us have lost loved ones and acquaintances to the virus. To end this pandemic, why not continue for a little while longer to observe such simple practices as wearing a mask when leaving one’s house, washing hands frequently, avoiding crowds and practicing social distancing to protect our country and democracy?

When all is said and done, the United States will remain a flourishing republic with our democracy preserved only when we, as citizens, report for work. That work is the key to ensuring that everyone can be free to enjoy life, liberty and the pursuit of happiness and that America can continue to be a beacon for the world.

Reporting for work can begin at an early age and continue to adulthood by studying world and U.S. history and other social studies; following the news, facts and science and remaining informed and educated about current issues and events; speaking up and speaking out; obeying the laws of the land; practicing kindness, openness, respect and inclusion; voting in every election, every time; and when necessary, stirring up a bunch of “good trouble,”

The promise of America was always meant to be kept by the self-governed — We the People — as assigned by the U.S. Constitution. We must be users, not losers, of our democratic system.